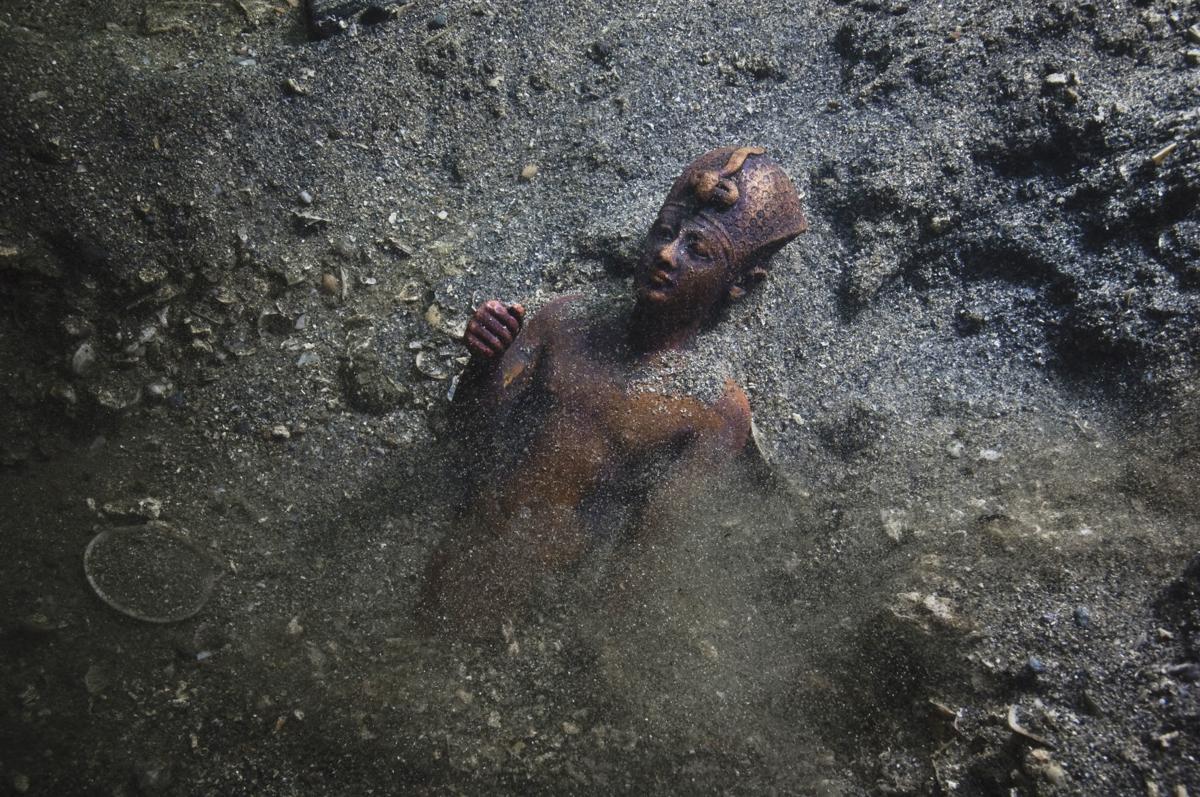 How must it have felt, there in the turquoise murk, to gaze into the eyes of antiquity?

That question may well occur to viewers of “Sunken Cities: Egypt’s Lost Worlds,” a ticketed exhibition now open at the Saint Louis Art Museum. The exhibition, which runs through Sept. 9, showcases ancient Egyptian artifacts discovered by an expedition in a bay on the Mediterranean Sea near Alexandria.

French maritime archaeologist Franck Goddio – founder and president of the European Institute for Underwater Archaeology in Paris – led the expedition.

“Our search for the sunken city of Thonis-Heracleion started in 1996,” Goddio relates from the far side of the Atlantic. “It took us years to map the research area – overall 11 by 15 kilometers [6.8 by 9.3 miles] – in today’s Aboukir Bay with various geophysic devices.

“In 2000, we had some electronic evidence that an area located 7.5 kilometers [4.7 miles] from the present coast concealed ancient remains hidden in the seabed. We conducted test archaeological excavations the same year. They soon revealed the presence of a long structure made of large limestone blocks. It was evident we were in the presence of a temple-surrounding wall. We were just in the heart of the city.”

Beyond having discovered that archaeological treasure-trove, Goddio is curating “Sunken Cities,” which Lisa Çakmak, the museum’s associate curator of ancient art, is co-curating locally.

The exhibition comprises not only 250 pieces found by Goddio and his team but also “complementary artifacts from museums in Cairo and Alexandria, some of which never have been shown outside of Egypt,” according to a press release from the local museum. 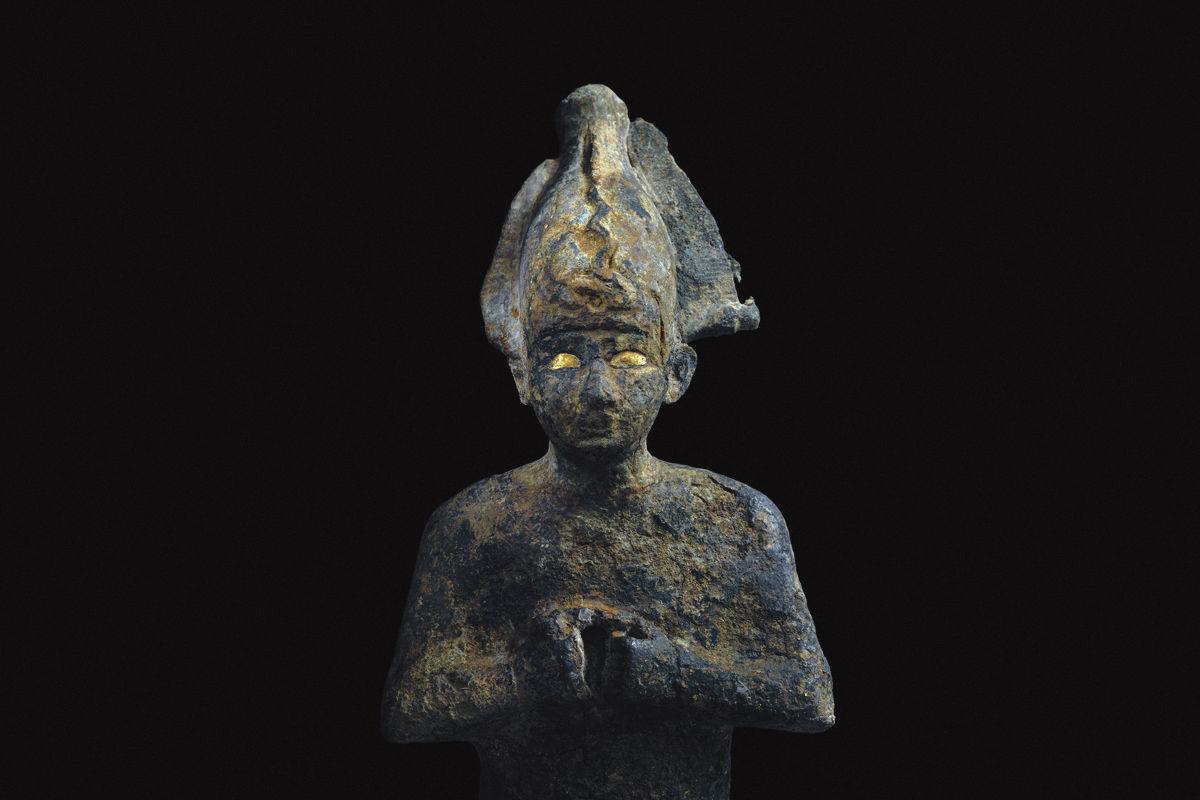 Also according to that release, Thonis-Heracleion occupied the Nile delta, reaching its zenith as Egypt’s main Mediterranean port in that nation’s Late Period (roughly 664 to 332 B.C.). By the year 800, though, various natural disasters combined to sink both it and nearby Canopus, and their ruins lay undisturbed 30 feet beneath the Mediterranean’s surface for more than a millennium.

The press release otherwise notes of the exhibition that this will be “its first viewing in America,” having previously appeared in institutions in Zurich, London and Paris.

Among the exhibition’s manifold magnificent artifacts, amateur Egyptologists may find themselves puzzling in particular over a 7.2-foot-tall granitoid bust identified only as “the black stone queen.” Helpfully, Çakmak tentatively identifies the enigmatic artifact as a tribute to Arsinoë II, something of a femme fatale born in 316 B.C.

“She has a fascinating story that we explore in the [personal] audio guide … ,” Çakmak says. “She was married three times. Two of those marriages were disastrous – imagine plotting, assassination attempts, murdered children and so forth. After the second marriage, to her half-brother, she fled [from Eurasia] home to Egypt, where she married her full brother, Ptolemy II, and as a result, she became queen of Egypt.

“She was very influential, and upon her death, her husband had her deified and decreed that every temple in Egypt had to have a cult statue of her. We think that this statue was the cult statue of Arsinoë II housed in the temple of Serapis at Canopus.”

The exhibition features artifacts involving not only that Egyptian deity, Serapis, but also the god Amun and the bovine god Apis, with at least one modest, settee-sized sphinx for good measure. Certain of the theological discoveries in the exhibition defy even the venerable Bulfinch’s Mythology, though, like the hippo-headed Taweret, the goddess of fertility and childbirth, and the flooding-related god Hapy, a red granite statue of whom looms almost 18 feet tall and weighs 6 tons.

Not all of the artifacts, it bears noting, mass that much, with “Sunken Cities” including much smaller statuary, as well as such pieces as a 3.5-inch-high lekythos, a container for oil; a 7.4-inch-diameter phiale, a drinking bowl; and a 14.7-inch-tall canopic urn, a mortuary device.

In that light, Çakmak reflects on the professional challenges of tackling curatorial duties on a project of such prominence. 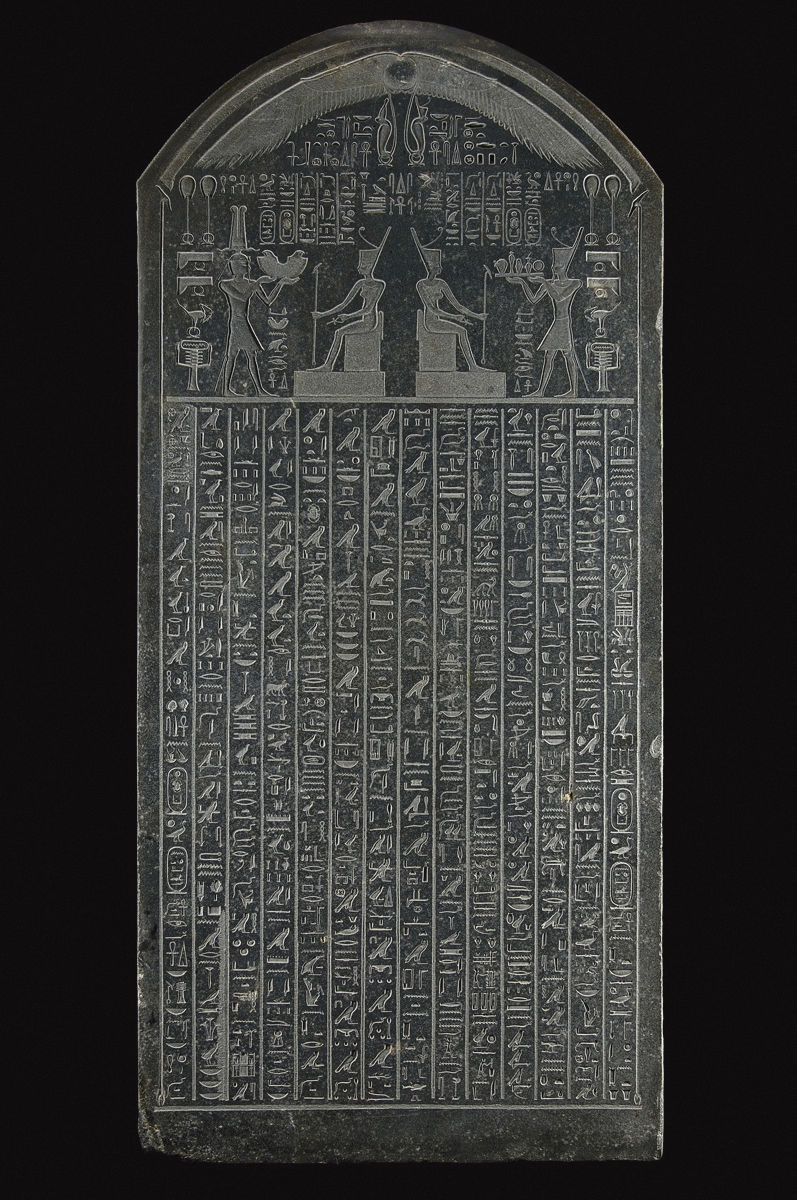 “My approach was that ‘it takes a village,’” Çakmak says, “and I believe that’s true regardless of the size and complexity of the show. This has been my first exhibition in the museum’s special-exhibition space, so I relied upon my colleagues in all different departments, who all have far more experience than me.

“It was also helpful that we had a certain narrative that we were expected to follow. While we did make changes to the narrative, it meant that I didn’t have to start from scratch – there was already a really strong base upon which to build. Due to the conditions of our museum and our galleries, we had to make certain changes and adapt the narrative and the overall feel of the show, and that was exciting. It makes this version of the exhibition different from the version that toured around Europe.”

Reflecting on the exhibition’s diversity, Çakmak continues: “What I love about this show is that there are no pyramids, no mummies and no desert – three things that I think a lot of people associate with ancient Egypt. The focus of this show is quite different, and I think it will surprise and delight visitors to see a different side of ancient Egypt.

“The show focuses on coastal towns that were very nautical, and I think often people don’t think of water as being the backbone of Egyptian civilization. Without the Nile, there would be no ancient Egypt! These cities show us that Egypt, while not necessarily a seafaring society, was certainly a river-faring culture, and boats and boat imagery feature prominently in their cosmological and religious beliefs.”

Goddio himself also reflects on the magnitude of his expedition and the exhibition, stating: “The moment you realize you have found what you were looking for is extraordinary. Discovering things that people who lived in ancient times left behind is an amazing experience. My team and I are still overwhelmed by the dimension of the city. Although we perform expeditions every year, we are still at the beginning of our research there.”

Then, just a bit ruefully, he adds, “We will have to continue our work for the next 200 years.”

Ancient necropolis discovered by archaeologists in Egypt: ‘This is only the beginning’

Archaeologists have discovered an ancient necropolis holding the mummified remains of a high priest of the Egyptian god Thoth.

The large cemetery was unearthed on a vast site on the edge of the desert near the Nile Valley city of Minya, south of the capital Cairo.

It is the latest find to be announced by the Egyptian Ministry of Antiquities and excavation work is expected to take at least five years.

“This is only the beginning of a new discovery,” said Antiquities Minister Khaled al-Anani.

One tomb contained more than 1,000 statues and four alabaster jars designed to hold the internal organs of a high priest of Thoth, the ancient god of the moon and wisdom who was depicted as a man with the head of an ibis.

The priest’s mummy, decorated with blue and red beads and bronze gilded sheets, was also recovered.

Forty sarcohagi – some bearing the names of their owners in hieroglyphics – are believed to belong to the priest’s family members.

Archaeologists started excavation work in the area late last year on a quest to find the remainder of the cemetery of Upper Egypt’s 15th district, or nome, during ancient times.

Mostafa Waziri, head of the archaeological mission, said eight tombs had been uncovered so far and that he expects more will be discovered soon.

You do not have access to view this Atom.

The area north of Tuna al-Gabal is known to house ancient catacombs from the Pharaonic Late Period and the Ptolemaic dynasty, including a large necropolis for thousands of mummified ibis and baboon birds.

Last year, the Ministry announced the discovery of a necropolis holding at least 17 mummies in the area of Tuna al-Gabal.

Egypt hopes the finds will reinvigorate the tourism industry after it suffered following political turmoil in the wake of the 2011 Revolution.